“I’m so proud of our team and thrilled for Michael and David,” said Bay Transit Director Ken Pollock.  “For the third year in a row, Bay Transit has earned well deserved recognition from their peers at transit systems across Virginia.  We may be one of the smaller transit systems in Virginia, but our commitment to innovation and excellence have really distinguished Bay Transit as a leader in our industry.”

While Michael Shackleford would tell you he was “just doing his job,” Reverend Dr. Maria Harris described the support she received from Mr. Shackleford on January 11th as “exceptional.”  Rev. Harris, who uses a wheelchair, was riding to/from Richmond to a dental appointment at VCU using Bay Transit’s New Freedom program.  All went well until 4:30 PM when Rev. Harris was ready to contact Shackleford to ride home when she discovered that her cellphone battery was dead, and she couldn’t call him.  Rev. Harris learned later that Mr. Shackleford, concerned about her whereabouts, had called Bay Transit to alert them to the situation and find out if they had heard from her.  Collaborating with a VCU staff person, Shackleford was reunited with Rev. Harris and drove her home, explaining that “he was not going to leave me stranded.”

Reverend Harris, who also serves on Bay Aging’s board of directors, was so moved by her experience that she wrote a letter to Bay Transit’s Director Ken Pollock stating, “Michael is an exceptional, caring, and resourceful driver who was committed to making sure his client not only arrived at their desired appointment but also arrived home. I applaud you for hiring such an excellent employee. My husband and I are very grateful for all that he did.”

David Fols puts the ‘Good to go!’ into safety:

In mid-2020, Bay Transit initiated a campaign promoting its commitment to customer service and safety in confronting COVID-19.  Bay Transit’s ‘Good to go!’ campaign included advertising on the outside of several buses touting many of the safety protocols and best practices implemented to ensure drivers and riders safety.  These measures included offering free rides on all Bay Transit buses to keep passengers and drivers from having to exchange money.

Two additional safety enhancements were later deployed to help Bay Transit become even more ‘Good to go!’  Mr. Fols installed Freudenberg Filtration premium cabin filters in every Bay Transit bus. The Freudenberg filters are 99.9% effective at inactivating viruses. “We had to make sure this style of filter didn’t impact air flow and cooling capacity before moving ahead with installing them fleetwide,” Fols recalled. “Compared to HEPA filters, this design minimally impacted air flow in our buses while still providing industry leading air filtration.”

As Bay Transit prepared to reinstate fare collection in April, Fols was again hard at work, this time cutting holes in the plexiglass shields surrounding the driver’s seats so passengers could safely begin paying bus fares again.  In summary, without David’s unrelenting commitment to the safety of Bay Transit’s bus operators and passengers, the ‘Good to go!’ campaign would have been little more than a clever marketing slogan.

Bay Transit, the public transportation division of Bay Aging, has received a $500 sponsorship donation from the Rappahannock Community College (RCC) Educational Foundation in support of the ‘Art in Transit’ 2022 contest and judged exhibition. Displaying the current RCC program and course offerings guide, RCC President Dr. Shannon Kennedy noted, “We are pleased to provide a $500 scholarship to help fund a continuing education opportunity that will allow a front-line employee at Bay Transit, such as a bus driver, mechanic, scheduler, or dispatcher, to take classes at Rappahannock Community College (RCC) or apply for the scholarship for a member of their family.”

Sarah Pope, RCC’s Vice President of College Advancement, added, “We have several successful partnerships already in place with Bay Transit, so we are thrilled to support their ‘Art in Transit’ 2022 initiative.” In 2019, Bay Transit installed bus shelters at RCC’s Warsaw and Glenns campuses. The same year, Bay Transit worked with the RCC Educational Foundation to eliminate fares for all students riding to and from RCC’s four campuses in Bay Transit buses. The RCC Educational Foundation reimburses Bay Transit for all student rides. “This initiative has been hailed by our students and administrators as a ‘godsend’ that has been critical to help transportation disadvantaged students access educational opportunities at RCC,” Pope said.

“We know how hard the Bay Transit bus drivers and other front-line staff have to work,” observed Bay Aging board director Cynthia Talcott. “Hopefully, financial assistance will help a Bay Transit employee, or employee’s family member, to pursue educational opportunities that may have otherwise been out of reach,” Talcott added. “In today’s hypercompetitive job market, we are hopeful that offering educational opportunities to front-line staff will help to distinguish Bay Transit from other employment opportunities.”

The “Call for Entries” to artists throughout the Northern Neck and Middle Peninsula to participate in the ‘Art in Transit’ 2022 contest and judged exhibition was issued in January and the deadline for entries and art submissions to the RAL Art Center in Kilmarnock is April 18th between 10 AM and 12 PM. This year’s award winners will be recognized at the ‘Art in Transit’ 2022 reception on Friday night, May 20th. The culmination of the reception will once again occur when a copy of the first-place entry is unveiled on the side of a Bay Transit bus.

To find out more and to download the entry form, please visit the RAL Art Center at www.RALartcenter.com or call RAL at (804) 436-9309. You can also download a copy of the Call for Entries and entry form by visiting the Bay Transit website at www.BayTransit.org.

Bay Transit, the RAL Art Center, and Gander Design held the first ever ‘Art in Transit’ competition and exhibition this October to help commemorate Bay Transit’s 25th Anniversary.  The award winners were recognized at the ‘Art in Transit’ Reception in Kilmarnock on Friday night, October 29th.  The culmination of the reception occurred when the first-place entry was unveiled on the side of a Bay Transit bus to the delight of the audience.

To reveal the first-place winner, Bay Transit Director Ken Pollock asked the audience to join him on the sidewalk in front of the RAL Art Center.  As the front doors were opened, there was a Bay Transit bus with Brenda M. Sylvia’s acrylic painting, “Jumping for Joy” displayed on the side of the bus.  “I feel really honored, and it looks great on the bus,” Ms. Sylvia said.  “I’m getting ready to cry.”  After Pollock presented Ms. Sylvia with the $700 first-place check and her Bay Transit 25th anniversary tumbler, she used a permanent marker to sign and date her artwork on the bus.

(Urbanna, VA) – Bay Transit, the public transportation division of Bay Aging, has been recognized by the Virginia Transit Association (VTA) as the Outstanding Community Program Award winner for 2020.  Bay Transit’s partnership with the Rappahannock Community College (RCC) Educational Foundation eliminated fares for all students riding to and from RCC’s four campuses on Bay Transit.  The initiative has been hailed by students and administrators as a “godsend.”  Prior to the COVID-19 pandemic, RCC students were embracing the partnership and RCC was enjoying increased enrollment.  After launching the program in mid-January, Bay Transit’s RCC ridership increased 327% versus the same two-month period in 2019 (615 vs. 188).

“We are honored to be recognized by the VTA for outstanding community programs like our innovative partnership with RCC,” said Ken Pollock, Director of Bay Transit.  “As it did for so many people, communities and businesses, COVID-19 caused a sudden curtailment of life as we knew it.  Yet the pandemic also afforded Bay Transit many new ways to help the communities that we serve.  Whether Bay Transit drivers were delivering groceries to area seniors, getting residents to their polling places on Election Day, or helping get essential workers to their jobs, we remain committed to doing everything we can in good times and in difficult times.”

Reflecting on the year that this was, Pollock concluded, “I am so proud of the entire Bay Transit team.  Throughout these difficult times, we have never suspended service.  It is an honor to serve with this dedicated team.” 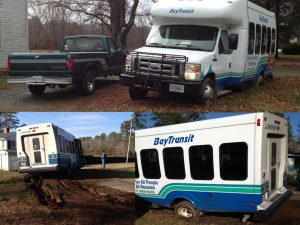 Bay Aging, through its Bay Transit Division provides thousands of rides a year throughout the Northern Neck, Middle Peninsula and beyond. The majority of its passengers are picked up and delivered to their homes in rural parts of the region 12 hours a day, 5 days a week.

As you can imagine, the word “rural” is a key component of the environment in which passenger’s live and the Bay Transit buses must reach each and every one.

To do this, many homeowners have residences that are easy to get to and others, well, not so much. This past winter was filled with ice, snow, lots of rain and it all led to driveways that were muddy, slippery and dangerous.

To keep the passengers, Drivers and buses safe, Drivers must be very aware at all times of road and driveway hazards such as those this winter. To keep Drivers aware, there was an awareness campaign this past winter that, to this date was successful. Driving safely was stressed in the Quarterly Safety Meetings and large posters showing buses stuck in the mud but the most effective warning was notifying Drivers several times a day to be aware of their surroundings. Each bus has an electronic tablet that is used for the driving schedule and Transit Dispatchers in the office are able to send safety messages throughout the day that show up on the tablet reminding Drivers to always be careful and to be safe. This technology is effective, efficient and timely and can be spread throughout the whole service area with a single key stroke!

Each year Bay Transit strives to provide the best and safest transportation in the region through professional Drivers, equipment and technology.